In this article ‘AWS Kops Kubernetes’ , you are going to setup  Kubernetes on AWS cloud environment.For which I am going to use a tool called KOPS.

What is KOPS? kops is an opinionated provisioning system with

As a part of the setup, you would need an Ubuntu or Debian instance with latest updates and other supporting utility/tools like AWS-CLI, S3 bucket, Hosted Zone on Route 53 and a registered domain. In this article, I am going to use Ubuntu instance to launch and install kubernetes cluster.

Ubuntu EC2-instance: Will be used to install kubernetes cluster

Let me launch an AWS EC2 Ubuntu instance and update with the latest packages.

I have installed AWS CLI to access the AWS instance from the command line to create Kubernetes cluster.

On AWS console, I have created a new IAM user (for example kops) with full access and saved the access keys as it would be used to configure the AWS CLI. Then I have copied both AWS access key ID and AWS secret access key for later usage.

On the EC2 instance, I have configured the newly created AWS IAM user with following commands

On the same the EC2 instance, I have generated a key pair for AWS EC2 user. It will be used to connect to the kubernetes cluster which I am going to create. In my case, as it is Ubuntu user the ssh keys by default are stored in .ssh folder of the user home directory.

An existing domain or a new domain can be used. In this example, I have created a new domain and hosted it on dot.tk which is a free domain provider.

I have registered a new domain on freenom.com with the name k8sclustersetup.tk which I going to use for my Kubernetes cluster.

These NameServer (NS) values should be updated on the domain service provider. In this setup, I have updated the NS details on freenom.com. 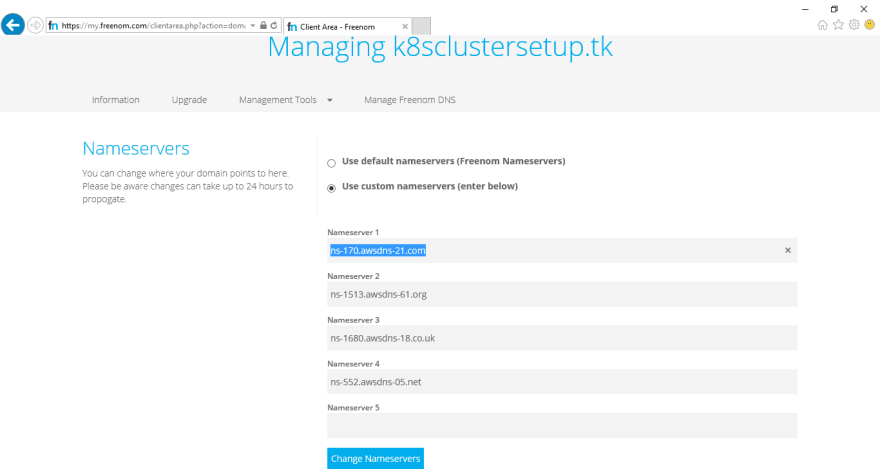 With this, all the pre-requisite has been setup and the environment is ready to create and launch the Kubernetes cluster.

For learning purpose, I have chosen the t2.micro which is a free EC2 instance. I have executed the below command to create the kubernetes cluster with one master and 2 worker nodes.

Cluster node details can be listed by issuing the below command.

Finally kubernetes service is up and running on aws ec2.

In this article, the details to install and configure Kubernets on AWS Cloud has been provided.

You can have a look at other importat aws services here.